Balancing on a tightrope Balancing on a tightrope

I didn’t witness Nik Wallenda successfully complete his high-wire walks above the city of Chicago back in November 2014. Wallenda already became a tightrope legend , after having crossed both the Grand Canyon and the Niagara Falls on tightropes earlier on. But achieving two crossings between skyscrapers on either side of the Chicago River without any safety net or harness was a special feat. He even completed one crossing blindfolded 152 meter above the ground in winds that were gusting at up to 40km/h.

With spectators watching in suspense, Wallenda must have been cautiously focusing on his center of mass as he gently positioned one foot in front of the other. Keeping both sides of the wire in balance is the only way to stay on the rope. Similarly, manufacturing companies need to carefully balance multiple (conflicting) design objectives when developing new products. Being able to do this interactively is what they see as a key requirement to help them successfully meet the development challenges ahead of them.

Real-world engineering is more complex than ever

Today, engineering challenges go way beyond a rightfully strong emphasis on lightweight design. For any new product, minimizing weight may be essential in pursuing commercial success but that should never compromise the product’s critical performance or quality attributes. What really matters is improving product performance and quality to the maximum extent, while reducing weight at the same time.

Multiobjective optimization involves tradeoffs to be made

Characteristic for multiobjective optimization is that there’s no single design variant that fully satisfies all objectives. Considering that some of the objectives are competing with each other (e.g. maximum performance vs. minimum soot and NOx emissions), ultimately there exist multiple optimal solutions.

Tradeoff solutions are located on the Pareto front

The set of tradeoff designs is called the Pareto set. The curve visualizing this set is generally known as the Pareto front. All design variants along the Pareto front (the so-called non-dominated or Pareto-optimal solutions) cannot be improved with respect to a single objective without degrading one or more of the other objectives. Ultimately, the decision for the preferred Pareto-optimal solution depends on additional subjective information: is it more important for the engine to deliver high performance, or should its real differentiator be minimum NOx emissions?

So the real purpose of multiobjective design optimization is identifying the set of Pareto-optimal solutions, rather than finding a single optimal design that outperforms all others (and which, doesn’t really exist, by the way). It’s then up to human decision makers to evaluate and quantify all promising tradeoffs between the different design objectives. This tradeoff analysis is essentially a subjective decision-making process, requiring a high degree of interactivity with the optimization process. To make multiobjective optimization more concrete, let’s focus on the example of an electric motor with interior permanent magnets (IPM). The engineering team in charge is set on a mission to maximize drive torque per ampere, while minimizing cogging torque. The disrupting cogging torque phenomenon exhibits the symptoms of jerkiness, resulting in torque ripple at low motor speeds (impacting quality perception negatively). To further raise the perceived quality of the electric motor, its noise radiation also needs to be reduced when possible.

The engineering team used Optimus’ non-dominated sorting evolutionary algorithm (NSEA+) to perform a multiobjective optimization and generate the Pareto front. The design parameters to be considered relate to the size, orientation and positioning of the rotor magnets and the stator coil slots. The points on the Pareto front shown below all represent motor design variants that feature a different tradeoff between drive torque and noise radiation. 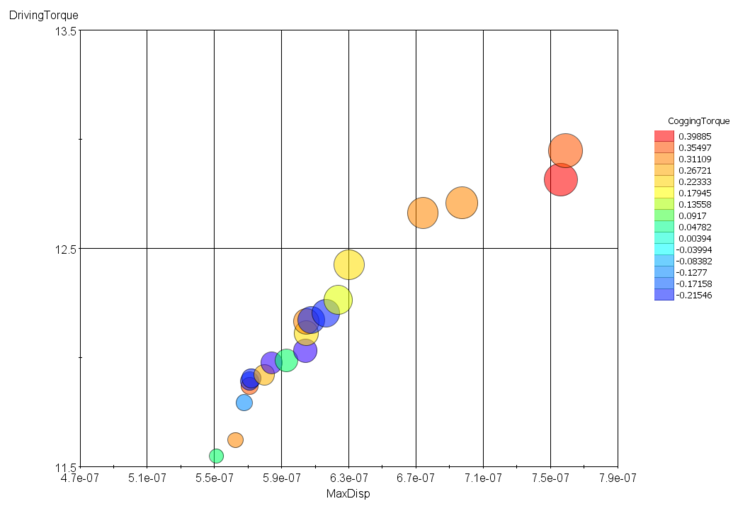 The prioritization and balancing of design objectives ultimately decides which Pareto-optimized design (and corresponding tradeoffs) will be selected by the engineering team. A parallel coordinates plot can be of great assistance. The parallel coordinates plot shown below illustrates that all Pareto-optimized designs fix the slot tip position to approximately 72 mm while achieving the tradeoff by balancing slot thickness and magnet width.

The design parameters and objective metrics for two distinct motor designs (labeled 3 and 99) near both opposing ends of the Pareto front can be easily identified on the parallel coordinates plot. The choice for either solution really depends on the relative importance the engineering team attributes to the various objectives. As can be deduced from the table below, the Pareto design 3 will be favored when the design needs to be as silent as possible. But to comply with its primary mission, the team will more likely opt for Pareto design 99 based on the information delivered by the multiobjective optimization process.

And how to consistently deal with constraints in the process?

Real-world engineering challenges do not only involve objectives to be minimized or maximized, but also constraints to be respected. Cost constraints are a typical example. The capability to manage constraints as part of the engineering optimization process obviously has a profound impact on this process. Want to know more? Then read our next blog post.